Undeterred by the cancellation of foreign trips and exchanges this year, our Upper Shell linguists attended a series of virtual language activities just before the February Exeat, finding a way to maximise the relationships with our partner schools abroad in spite of the pandemic.

The Russianists took part in a virtual language day with the Liden and Denz Intercultural Institute of Languages. Discussions covered the different schooling in Russia and the UK and the history and architecture of St Petersburg – the drawbridges and cathedrals were very much the highlights.

In Spanish, pupils took the first day to build confidence speaking in the language, utilising familiar topics to practise the future, present, preterite and conditional tenses. The second day looked at environmental issues, involving much trickier language! However, the class also experimented with lyric learning, listening to a Spanish song composed by the Colombian singer Camilo.

Our Upper Shell Germanists had their virtual language practice with Deutschakademie in Vienna. Pupils discussed all manner of cultural topics and presented on their own lives on day one, before moving on to Viennese folk music and the popular German film Die Welle on day two.

Finally, the Francophones were fortunate enough to start the day with a language workshop conducted by the grammarian Caroline Tracey, live from Brittany. They then recorded short video clips for the attention of the pupils at Lycée Janson de Sailly, our partner school in Paris.  A workshop on rap, comedy and the banlieue then followed, courtesy of the Institut français, and the day concluded with a talk by sports journalist Chris Dennis on French and the importance of languages in his profession, which proved a particular favourite among the Westminster linguists.

The School sends its thanks to all the partnerships that made these opportunities available to our linguists in such challenging circumstances, and we sincerely hope that next year’s exchanges will operate in a more familiar way! 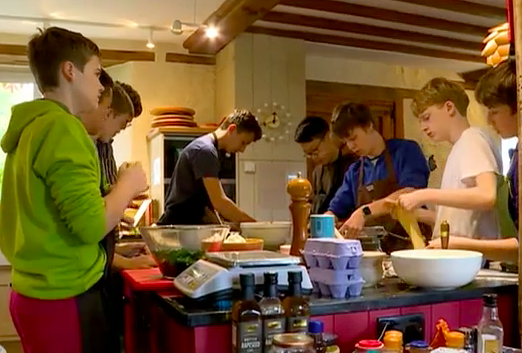