The Queen and Westminster

Westminster's relationship with the Crown goes back centuries, to at least the time of King Henry VIII. This long and treasured association has seen the School host many monarchs over the years — visits which are fondly remembered by pupils well beyond their time at the School. To mark Her Majesty The Queen's Platinum Jubilee, we look back at the four occasions on which the School played host to our longest-serving monarch.
1960 ·  1988 ·  2010 ·  2014
Before Elizabeth II ·  More from the Archives
400th Anniversary since the refoundation by Elizabeth I

The Queen’s first visit to the school in 1960 is remembered in the pages of The Elizabethan as well rehearsed and faultlessly delivered. She attended a service in Westminster Abbey, met with Housemasters in the Jerusalem Chamber and maintenance staff at College Hall, before proceeding up School. There she unveiled an inscription on the Shell in a reconstructed School following the significant bomb damage sustained during World War Two. The inscription is an acrostic of ‘Semper Eadem’ [always the same] and reads:

Both the Queen and Duke of Edinburgh drank sherry with the Head Master, looked on as the pupils’ Busby Film Group filmed in Yard, and departed the school amid a crowd of enthusiastic applause.

In 1988, the Queen opened the Robert Hooke Science Centre, named after the 17th-century Old Westminster scientist, and a desperately needed update to the former facilities in Sutcliff’s on Great College Street. She toured the laboratories, seemingly very interested in the pupils’ experiments, and also visited the main school site. Echoing Latin verse compositions 16th-century pupils had dedicated to Elizabeth I, new poems were penned for Elizabeth II. Composed in English rather than Latin, they can be found in the 1989 edition of The Elizabethan, alongside an entertaining account of the Royal visit by an opinionated Queen’s Scholar ‘doing [his] best to swallow all [his] Republican sympathies’.

450th Anniversary since the refoundation by Elizabeth I

The 450th anniversary of the refoundation of Westminster School involved a busy programme of events, with a visit from the Queen at the heart of proceedings. She attended a service in Westminster Abbey and a lunch at College Hall but perhaps most notably, she unveiled a statue of Elizabeth I, who is celebrated as the School’s foundress. It cuts a controversial figure in Little Dean’s Yard, eight feet high and constructed from brass, marble and stone, and stands as a reminder of the patronage of Elizabeth I, the 450th anniversary celebrations, and the visit from the Queen.

Opening of the Sports Centre

The Queen’s most recent visit to the School was to open the Westminster School Sports Centre in June 2014. The 6,000m2 building was previously a Royal Horticultural Society exhibition hall but now houses facilities for pupils’ Station choices. The Queen unveiled a plaque and was presented with a bouquet of flowers before speaking with pupils. She was reportedly very pleased with the presentation of a leather-bound photograph album, made by pupils in the bookbinding workshop, containing image of royal visits dating back to the time of George V.

Westminster School’s royal links date back to King Henry VIII. After the dissolution of Benedictine monastery at Westminster, he refounded the Abbey’s Grammar School and established a Royal Charter providing for 40 King’s Scholars to receive an education. Following the brief restoration of the monastery at Westminster Abbey under Mary I, Elizabeth I issued a new charter and supported the School. She attended her scholars’ annual Latin Play and encouraged donations to the school from her wealthy courtiers.

The longest serving Westminster School Head Master (1638 -1695), Dr Richard Busby, was a staunch royalist. He led pupils in prayers for the King’s soul during Charles I’s execution. When, following the monarchy’s restoration, Charles II visited the school, Dr Busby broke protocol by neglecting to remove his hat. When the King asked him why, Busby explained that he could not have pupils believing there to be a higher authority in the school room than the Head Master. It was a remark that amused the King, who had a wooden throne carved for Busby as a gift, which is still used by current Head Masters at the annual Election Dinner.

Monarchs continued to visit Westminster School to attend performances of the Latin Play or to watch the annual Pancake Greaze, but the events most relished by the pupils were Coronations. The scholars have likely attended every royal coronation since the refounding of the School and they have a unique role to play in the ceremony: when the crown touches the head of the monarch, the scholars thrice proclaim ‘Vivat Rex’ or ‘Vivat Regina’. For the first coronation after the long reign of Queen Victoria, that of Edward VII, the Head Master had to attend the Court of Claims to advocate for the right of the scholars to maintain their role in the ceremony. He was successful, but the pupils were moved from prime seats in a gallery to the Triforium due to the expanded scale of the coronation. From here, they have watched every subsequent coronation and had their part codified in Parry’s coronation anthem, I was Glad.

Old Westminster and former scholar John Oliver recalls of the coronation of our current queen:

"Because we were positioned so high in the Abbey, we had room to move around to get a better view. I knew as the crown was placed on the Queen’s head that it was a dramatic moment I would remember for the rest of my life. She was beautiful and impressive and the whole thing was just amazing."

Royal events, be they visits to the school itself or events in Westminster Abbey, have always played an important part in the School's history and they continue to be celebrated and cherished by all the pupils and members of staff involved.

More from the Archives

The Greaze of 1919 was watched not only by King George V and Queen Mary, but also the future kings Edward VIII and George VI. The Greaze, a Shrove Tuesday custom at the School, sees the School's chef launch a pancake over a suspended bar in the School's main hall, 'School', and Upper School boys scramble for the largest piece. Traditionally, the winner would have received a gold guinea from the Dean of Westminster, which they could then choose to return in exchange for a half-day's holiday for the whole school. Nowadays, keeping the guinea isn’t an option, and a day’s holiday is scheduled long in advance. 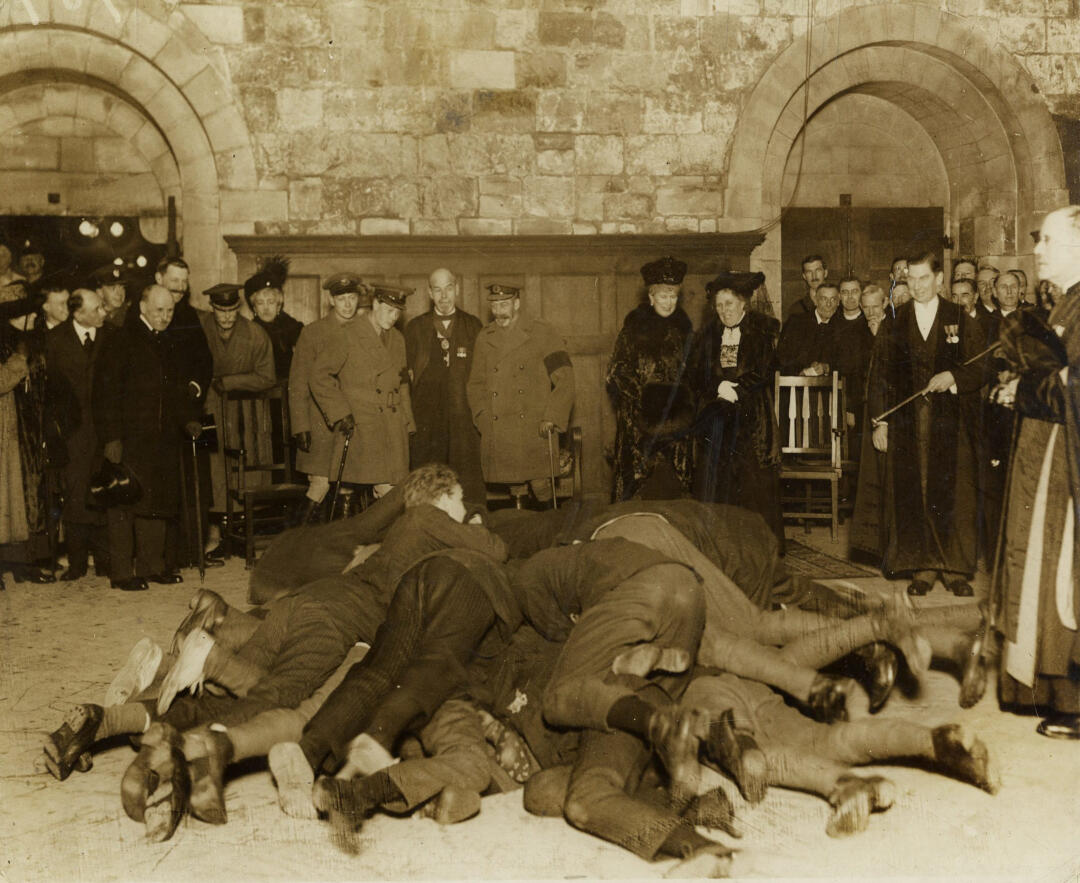 Royal visit to the 1919 Greaze 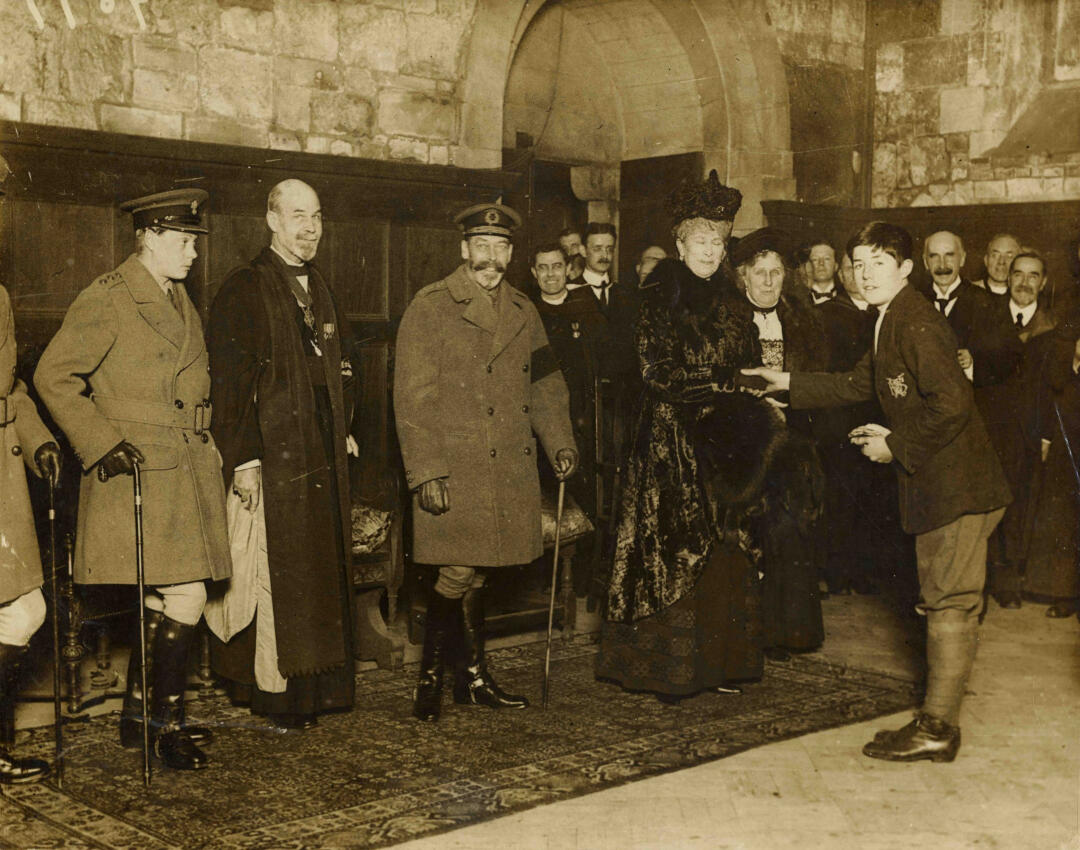 Royals meeting pupils at the 1919 Greaze

Following the visit of King George VI and Queen Elizabeth in 1937, they signed a copy of the edition of The Elizabethan in which their visit is recorded and returned it to the school to be held in the archives, where it remains. The Elizabethan is a pupil-led magazine that is published annually during the summer, which provides an insight into the preceding academic year at the School. 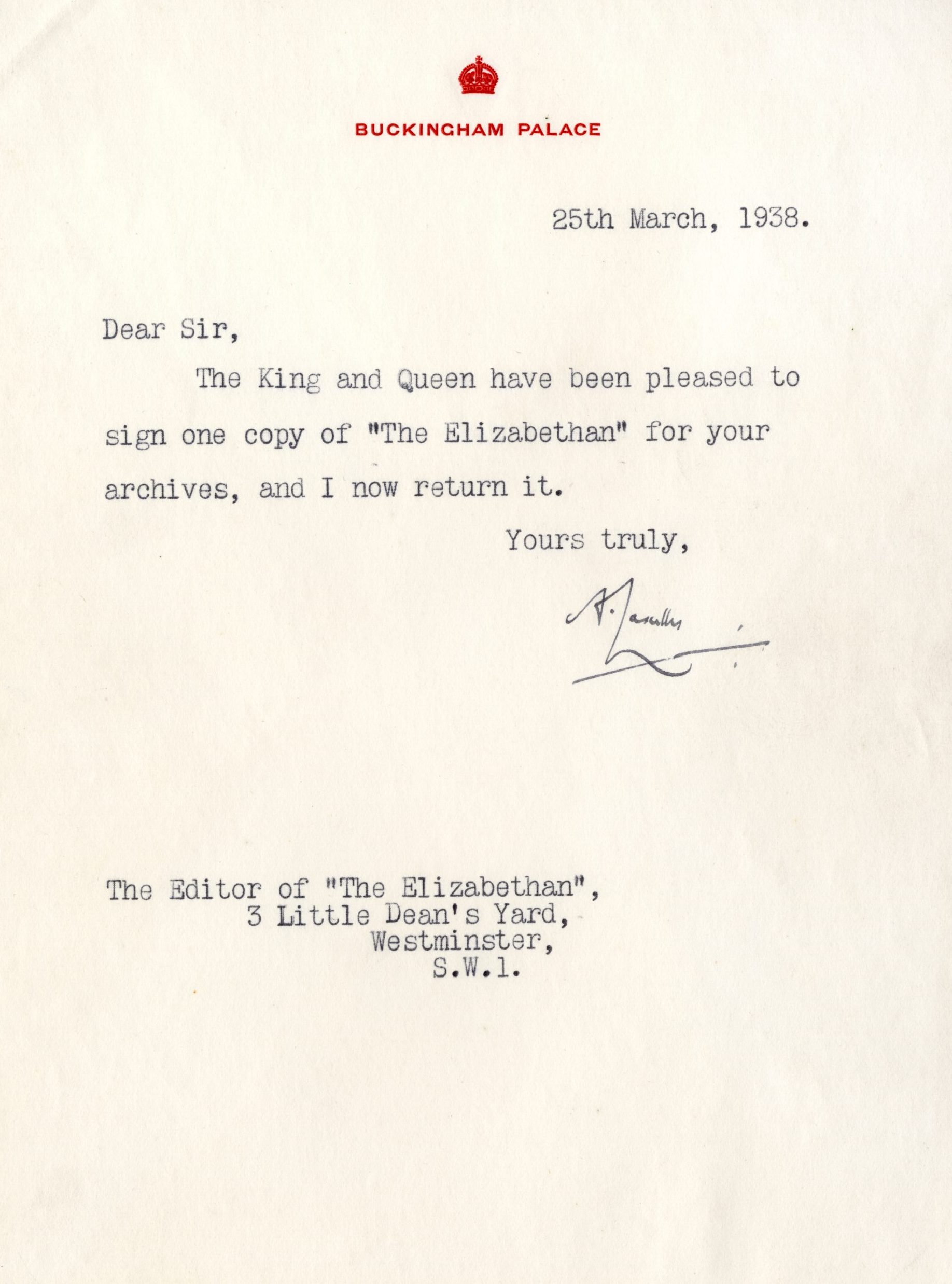 Letter about The Elizabethan Magazine 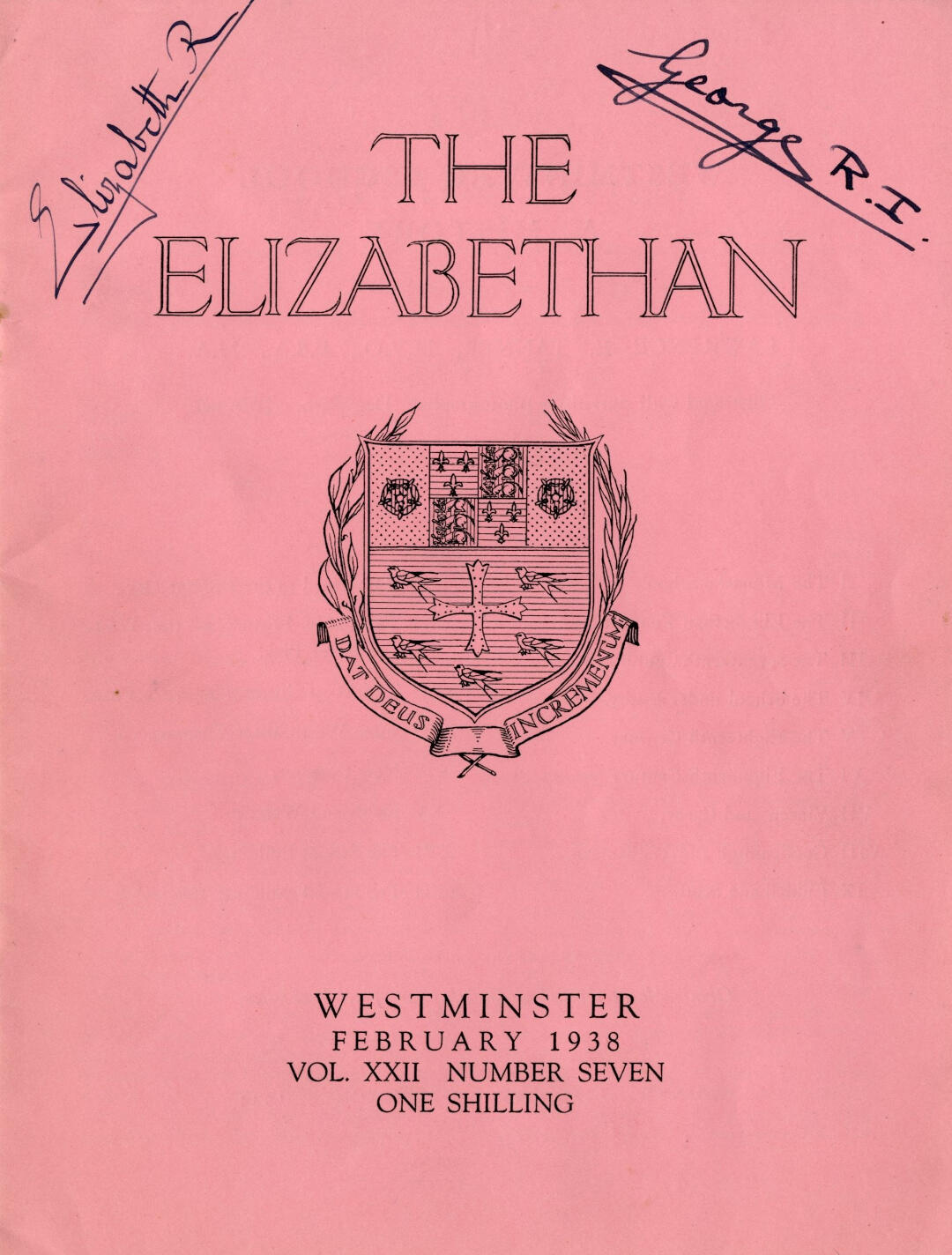 Signed copy of The Elizabethan Magazine

1951 - Reopening of College by George VI

Once College had been rebuilt following the bomb damage it sustained during the Second World War, King George VI and Queen Elizabeth attended the official reopening. College was originally built in 1730, replacing the former scholars’ dormitory in accommodating the 40 scholars provided for by Elizabeth I’s original statutes. The building remains home to those pupils who are awarded Queen’s Scholarships, as well as housing two day houses. 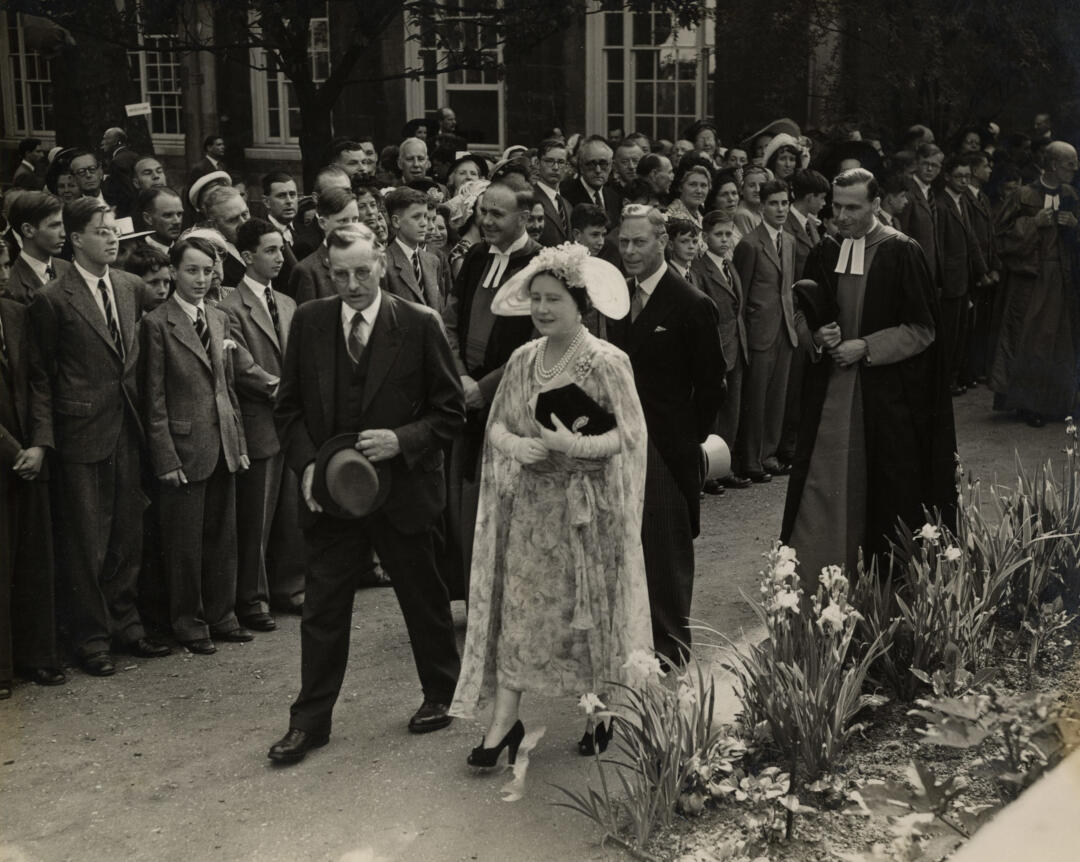 Reopening of College in 1951
← back to Our History