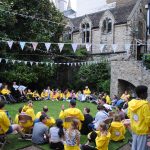 Our Charities Forum, made up of both pupils and staff, meets regularly to develop ideas for School-wide fundraising and supports individual pupils who have their own initiatives. Each House also elects their own Charity Representative and nominates a particular charity to support each year, so pupils really take ownership of both the activities and the beneficiaries of their fundraising. There are also opportunities for families to get involved, particularly with our annual whole-School fundraising event ‘September Saturday’: a fair enjoyed by pupils and parents alike, all contributing to the running of various stalls, games, raffles and an auction.

In an average year the School raises somewhere in the region of £40,000, meaning we are able to support approximately 30 different charities; from national and international organisations such as CAFOD to smaller local charities such as the Frank Barnes School for Deaf Children and the Westminster Almshouses. Support of the latter type gives pupils the opportunity to combine their fundraising efforts with their volunteering, involving themselves practically in the work which they have financially helped to make possible.

← back to Partnerships
Join Us